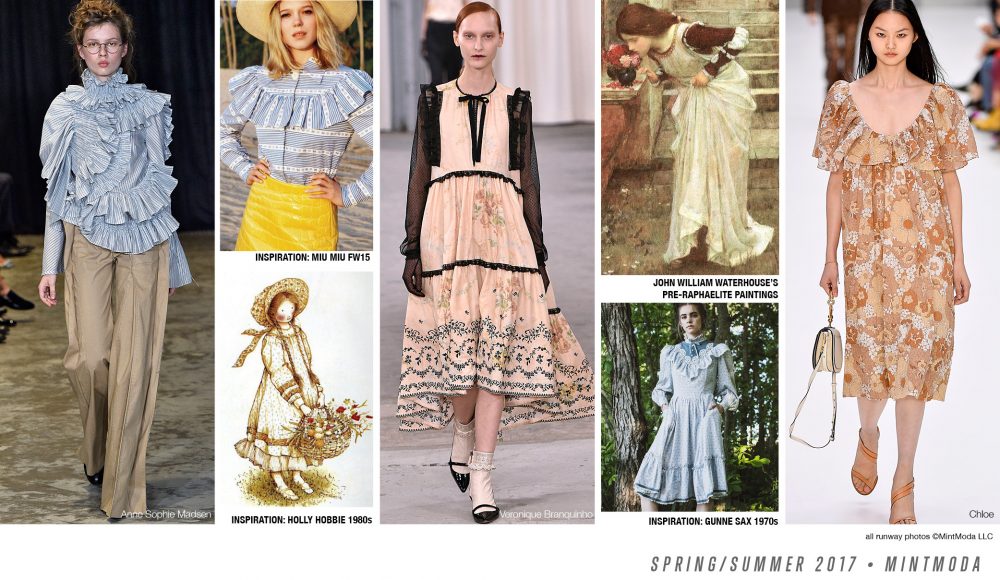 One of the latest and most surprising fashion trends has hit 57th and 5th: a window at Bergdorf Goodman features a dress from the house of Balenciaga that many people would otherwise recognize from the 1970s television show “Little House on the Prairie.”  Despite its humble origins, the prairie dress (also known originally as the “Mother Hubbard” dress) is the latest in Paris chic, and this is not the first time the modest style has been the new thing in the world’s capitals of fashion.

The last time the long, loose dress with a high collar, its fullness gathered into a ruffled yoke, was in fashion was in the 1970s when it was part of the romantic look popularized by Laura Ashley and Jessica McClintock for Gunne Sax.  Proponents of the voluminous look had picked up the trend from hippies and women’s libbers of the late 1960s who made the style trendy, along with wire-rimmed granny glasses and Tiffany Lamps — which leads us back to its fashionable origins in the late nineteenth-century Art Nouveau and Symbolist movements.

The high-waisted smock dress first appeared as a fashionable silhouette in the last quarter of the nineteenth century as part of the reform movements of that time, worn by proponents of the Aesthetic Movement in design and the Pre-Raphaelite group in painting.  The women who served a muses to the mostly male Pre-Raphaelite artists broke free of the corseted and “upholstered” styles of the mid-nineteenth century and donned loose-fitting smock-like dresses that recalled the high-waisted Romantic-era gowns of their mothers, circa 1830.

To our eyes the Pre-Raphaelite beauties look like visions from fairytales but they were real, young, fashionable women dressed the latest styles of the 1890s. (The long, high-waisted dress can be seen in one of the most recognizable works of Art Nouveau porcelain: the surtout de table depicting “The Scarf Dance”, modeled in 1901 by Léonard-Agathon van Weydeveld and produced in porcelain by Sevres.) The hippie movement rediscovered many aspects of late nineteenth-century culture, especially the sinuous lines of Art Nouveau, reflected in psychedelic posters and the Biba look. When hippies donned the granny dress in 1967 it once again became a style of the young. 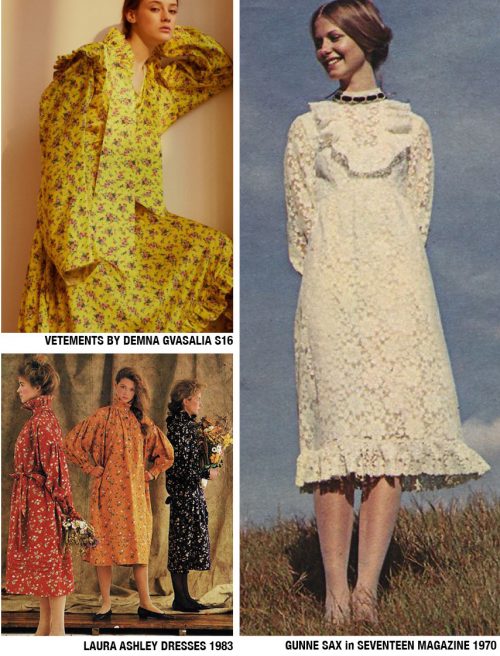 By the time New Wave hit in the late 70s and cleared away any vestiges of hippie-ism, the dress was out. To people who grew up in the years of its waning popularity, the ruffled style was borderline kitsch, more identified with the Holly Hobbie character on mass-market greeting cards than with the fashion elite. Which is why this homespun style in Bergdorf’s window might be a shocking sight to the store’s over-40 customer, but just right for its younger cutting-edge clientele.  That youngest and most avant garde demographic has a new leader in Vetements and Balenciaga’s creative director Demna Gvasalia, who has an absolute lock on what is cool right now.